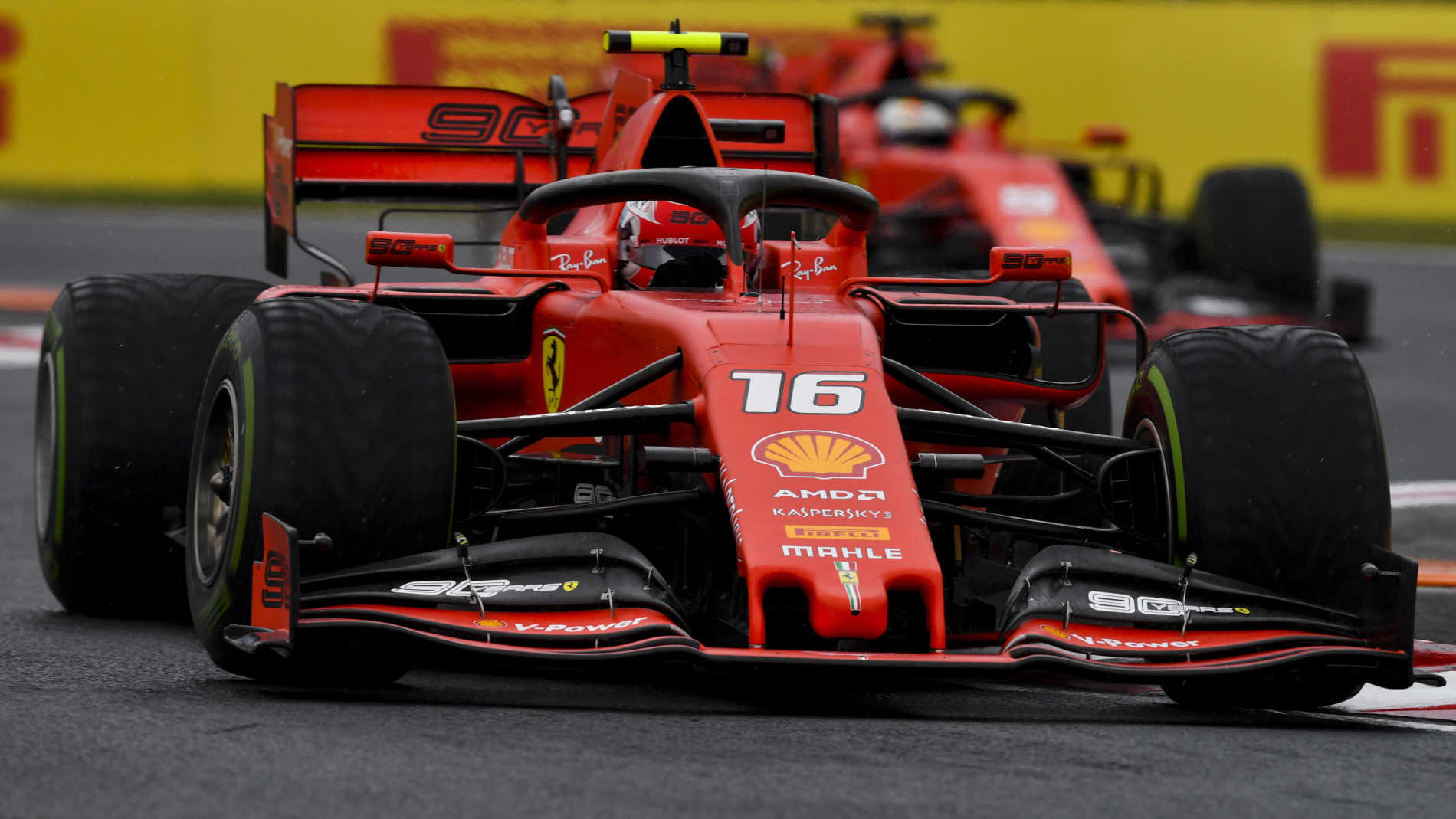 Grand Prix motor racing, a form of motorsport competition, has its roots in organised automobile racing that began in France as early as 1894.[1] It quickly evolved from simple road races from one town to the next, to endurance tests for car and driver. Innovation and the drive of competition soon saw speeds exceeding 100 miles per hour (160 km/h), but because early races took place on open roads, accidents occurred frequently, resulting in deaths both of drivers and of spectators.[1]

Grand Prix motor racing eventually evolved into formula racing, and one can regard Formula One as its direct descendant. Each event of the Formula One World Championships is still called a Grand Prix; Formula One is also referred to as “Grand Prix racing”.

Motor racing was started in France, as a direct result of the enthusiasm with which the French public embraced the motor car.[2] Manufacturers were enthusiastic due to the possibility of using motor racing as a shop window for their cars.[2] The first motoring contest took place on July 22, 1894 and was organised by a Paris newspaper, Le Petit Journal. The Paris–Rouen rally was 126 km (78 mi), from Porte Maillot in Paris, through the Bois de Boulogne, to Rouen. Count Jules-Albert de Dion was first into Rouen after 6 hours 48 minutes at an average speed of 19 km/h (12 mph). He finished 3 minutes 30 seconds ahead of Albert Lemaître (Peugeot), followed by Auguste Doriot (Peugeot, 16 minutes 30 seconds back), René Panhard (Panhard, 33 minutes 30 seconds back), and Émile Levassor (Panhard, 55 minutes 30 seconds back). The official winners were Peugeot and Panhard as cars were judged on their speed, handling and safety characteristics, and De Dion’s steam car needed a stoker which the judges deemed to be outside of their objectives.[3][4]

In 1900, James Gordon Bennett, Jr., the owner of the New York Herald and the International Herald Tribune, established the Gordon Bennett Cup. He hoped the creation of an international event would drive automobile manufacturers to improve their cars.[5] Each country was allowed to enter up to three cars, which had to be fully built in the country that they represented and entered by that country’s automotive governing body.[5] International racing colours were established in this event.[5] The 1903 event occurred in the aftermath of the fatalities at the Paris-Madrid road race, so the race, at Athy in Ireland, though on public roads, was run over a closed circuit: the first ever closed-circuit motor race.

Some anglophone sources wrongly list a race called the Pau Grand Prix in 1901. This may stem from a mistranslation of the contemporary French sources such as the magazine La France Auto of March 1901.[6] The name of the 1901 event was the Circuit du Sud-Ouest and it was run in three classes around the streets of Pau. The Grand Prix du Palais d’Hiver was the name of the prizes awarded for the lesser classes (‘Light cars’ and ‘Voiturettes’). The Grand Prix de Pau was the name of the prize awarded for the ‘Heavy’ (fastest) class. Thus Maurice Farman was awarded the ‘Grand Prix de Pau’ for his overall victory in the Circuit du Sud-Ouest driving a Panhard 24 hp.[Note 1][Note 2][Note 3]

The only race at the time to regularly carry the name Grand Prix was organised by the Automobile Club de France (ACF), of which the first took place in 1906. The circuit used, which was based in Le Mans, was roughly triangular in shape, each lap covering 105 kilometres (65 mi). Six laps were to run each day, and each lap took approximately an hour using the relatively primitive cars of the day. The driving force behind the decision to race on a circuit – as opposed to racing on ordinary roads from town to town – was the Paris to Madrid road race of 1903. During this race a number of people, both drivers and pedestrians – including Marcel Renault – were killed and the race was stopped by the French authorities at Bordeaux. Further road based events were banned.

From the 32 entries representing 12 different automobile manufacturers, at the 1906 event, the Hungarian-born Ferenc Szisz (1873–1944) won the 1,260 km (780 mi) race in a Renault. This race was regarded as the first Grande Épreuve, which meant “great trial” and the term was used from then on to denote up to the eight most important events of the year.[9]

Races in this period were heavily nationalistic affairs, with a few countries setting up races of their own, but no formal championship tying them together. The rules varied from country to country and race to race, and typically centered on maximum (not minimum) weights in an effort to limit power by limiting engine size indirectly (10–15 L engines were quite common, usually with no more than four cylinders, and producing less than 50 hp). The cars all had mechanics on board as well as the driver, and no one was allowed to work on the cars during the race except for these two. A key factor to Renault winning this first Grand Prix was held to be the detachable wheel rims (developed by Michelin), which allowed tire changes to occur without having to lever the tire and tube off and back on the rim. Given the state of the roads, such repairs were frequent.

For the most part, races were run over a lengthy circuit of closed public roads, not purpose-built private tracks. This was true of the Le Mans circuit of the 1906 Grand Prix, as well as the Targa Florio (run on 93 miles (150 km) of Sicilian roads), the 75 miles (121 km) German Kaiserpreis circuit in the Taunus mountains, and the French circuit at Dieppe (a mere 48 miles (77 km)), used for the 1907 Grand Prix. The exceptions were the steeply banked egg-shaped near oval of Brooklands in England, completed in 1907, the Indianapolis Motor Speedway, first used in 1909 with the first Indianapolis 500-Mile Race in 1911, and the Autodromo Nazionale Monza, in Italy, opened in 1922.

In 1908, the United States of America became the first country outside France to host an automobile race using the name Grand Prix (or Grand Prize), run at Savannah. The first Grande Épreuve outside France was the 1921 Italian Grand Prix held at Montichiari. This was quickly followed by Belgium and Spain (in 1924), and later spread to other countries including Britain (1926). Strictly speaking, this still wasn’t a formal championship, but a loose collection of races run to various rules. (A “formula” of rules had appeared just before World War I, finally based on engine size as well as weight, but it was not universally adopted.)

In 1904, many national motor clubs banded together to form the Association Internationale des Automobile Clubs Reconnus (AIACR). In 1922 the Commission Sportive Internationale (CSI) was empowered on behalf of AIACR to regulate Grand Prix racing and other forms of international racing. Since the inception of Grand Prix racing, competitions had been run in accordance with a strict formula based on engine size and vehicle weight. These regulations were virtually abandoned in 1928 with an era known as Formula Libre when race organisers decided to run their events with almost no limitations. From 1927 to 1934, the number of races considered to have Grand Prix status exploded, jumping from five events in 1927, to nine events in 1929, to eighteen in 1934 (the peak year before World War II).

During this period a lot of changes of rules occurred. There was a mass start for the first time at the 1922 French Grand Prix in Strasbourg. The 1925 season was the first season during which no riding mechanic was required in a car, as this rule was repealed in Europe after the death of Tom Barrett the previous year. At the 1926 Solituderennen a well thought-out system, with flags and boards, giving drivers tactical information, was used for the first time by Alfred Neubauer, the racing manager of the Mercedes-Benz team. The 1933 Monaco Grand Prix was the first time in the history of the sport that the grid was determined by timed qualifying rather than the luck of a draw.

All the competing vehicles were painted in the international auto racing colors:

Note: beginning in 1934, the Germans stopped painting their cars, allegedly after the paint had been left off a Mercedes-Benz W25 in an effort to reduce weight. The unpainted metal soon had the German vehicles dubbed by the media as the “Silver Arrows“.

French cars continued to dominate (led by Bugatti, but also including Delage and Delahaye) until the late 1920s, when the Italians (Alfa Romeo and Maserati) began to beat the French cars regularly. At the time, the Germans engineered unique race vehicles as seen in the photo here with the Benz aerodynamic “teardrop” body introduced at the 1923 European Grand Prix at Monza by Karl Benz.

In the 1930s, however, nationalism entered a new phase when the Nazis encouraged Mercedes and Auto Union to further the glory of the Reich. (The government did provide some money to the two manufacturers, but the extent of the aid into their hands was exaggerated in the media; government subsidies amounted to perhaps 10% or less of the costs of running the two racing teams.)[12] The two German marques utterly dominated the period from 1935 to 1939, winning all but three of the official Championship Grands Prix races run in those years. The cars by this time were single-seaters (the riding mechanic vanished in the early 1920s), with 8 to 16 cylinder supercharged engines producing upwards of 600 hp (450 kW) on alcohol fuels.

As early as October 1923, the idea of an automobile championship was discussed at the annual autumn conference of the AIACR (Association Internationale des Automobile Clubs Reconnus) in Paris. However, discussion centered on the increased interest in racing by manufacturers and holding the first European Grand Prix at Monza in 1923. The first World Championship took place in 1925, but it was for manufacturers only, consisting of four races of at least 800 km (497 mi) in length. The races that formed the first Constructors’ Championship were the Indianapolis 500, the European Grand Prix, and the French and Italian Grands Prix. A European Championship, consisting of the major Grand Prix in a number of countries (named Grandes Épreuves) was instituted for drivers in 1931, and was competed every year until the outbreak of World War II in 1939 with the exception of 1933 and 1934.

The post-war years and Formula One[edit]

In 1946, following World War II, only four races of Grand Prix calibre were held. Rules for a Grand Prix World Championship had been laid out before World War II, but it took several years afterward until 1947 when the old AIACR reorganised itself as the Fédération Internationale de l’Automobile or “FIA” for short, headquartered in Paris. It announced the new International Formula, also known as Formula 1 or Formula A, to be effective from 1947. At the end of the 1949 season the FIA announced that for 1950 they would be linking several national Formula One Grands Prix to create a World Championship for drivers, although due to economic difficulties the years 1952 and 1953 were actually competed in Formula Two cars. A points system was established and a total of seven races were granted championship status including the Indianapolis 500. The first World Championship race was held on 13 May 1950 at Silverstone in the United Kingdom.